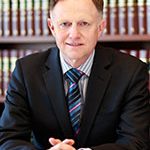 Stephen John Gageler was appointed to the High Court in October 2012. At the time of his appointment he was Solicitor-General of Australia.  He is a graduate of the Australian National University and has post-graduate qualifications from Harvard University. He was admitted as a barrister of the Supreme Court of New South Wales in 1989 and was appointed Senior Counsel in 2000. Before his appointment as Solicitor-General in 2008, he practised as a barrister extensively throughout Australia principally in constitutional law, administrative law and commercial law.

More information will be made available shortly. Please check back at a later date.